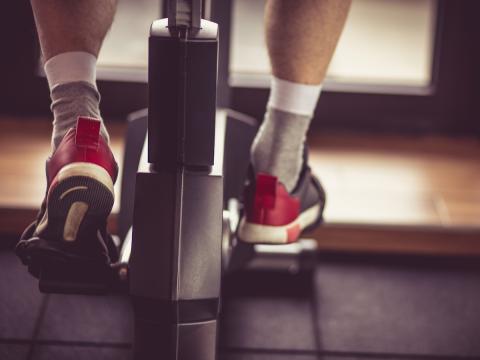 A recent research paper has concluded that pedalling regularly on a simple exercise bike may be a more effective rehabilitation protocol for patients who have undergone a total knee replacement than the conventional approach.

Conducted at Bond University by a team comprising Professor of Musculoskeletal Physiotherapy Wayne Hing, Senior Orthopaedic Physiotherapist Larissa Sattler and orthopaedic surgeon and Associate Professor Dr Christopher Vertullo, the research was based on a trial involving 60 patients who had undergone total knee replacement at the Pindara Private Hospital on the Gold Coast(1).

The study, a randomised controlled trial which assessed outcomes at intervals of two days, two weeks and at four months, found that there was a significant improvement in the results of the six minute walk test at the two day mark of patients who had followed an exercise bike routine (involving three different exercises) as opposed to another group who had followed a more conventional protocol which included ten different types of exercises, not including any exercise bike routines. Across a number of different measures the 'pedalling-based protocol' showed better outcomes at all stages compared to the normal rehabilitation protocol. In addition patients using the exercise bikes also were able to leave hospital on average half a day before patients following the normal routine.

The research team found that the exercise bike approach was most effective in the period immediately after surgery, both in terms of functional measurement and patient reported outcomes, with the difference between the two approaches lessening over time.

The standard rehabilitation approach involves a progressive series of exercised over a 12 week postoperative period.

As reported in our previous article (How long does a replacement joint last?), there were 63,577 knee procedures carried out in Australia in 2018, and the number of joint replacements required over the coming years is projected to continue to go up, due mainly to increases in both longevity and obesity in the population.

The results of the study also surprised the researchers, who initially assumed the standard protocol would be found more effective. If the study findings are borne out by further research, this will have two main beneficial effects – firstly the 'pedalling protocol' will be easier for patients to follow, since it involves only three exercise types, all on an exercise bike (as opposed to at least ten on the standard protocol), and secondly it may well be considerably less expensive(2) than following a standard rehabilitation program. Another benefit identified by the researchers was that patients following the exercise bike rehabilitation reported less pain than their colleagues following the standard protocol.

(1) the research was published in April 2019 in The Journal of Bone and Joint Surgery
(2) although a 'standard' exercise bike may cost around $300, a very simple set of exercise pedals can be bought for around $30