Patellar instability – problems with the kneecap 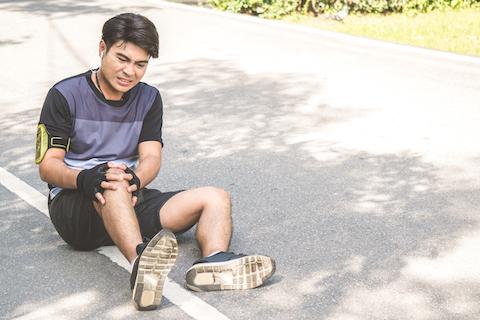 The word 'patella' is the medical term for the kneecap – patella in Latin literally means 'little pan'. It is classified as a sesamoid bone, which means it is completely embedded in a tendon (or muscle) – in fact it's the largest sesamoid bone in the body. Its job is to allow extension of the knee by increasing the lever action of the quadriceps tendon on the thigh bone (femur). At birth it is formed of soft cartilage which becomes bone at around three years old.

The patella normally travels up and down as the knee bends and straightens (technically, up when it straightens and down when it bends) and it is kept in place by travelling along a groove at the end of the femur (called the 'trochlea').

Where the patella has dislocated previously, or patella subluxation has occurred, this can make the kneecap prone to continued instability. After one dislocation, the risk of another is 15%-45%, after two this goes up to 60%-80%.

The condition is sometimes caused by some form of injury (trauma), but in other cases a person may simply be predisposed to instability of the patella.

With children, it can only take a small and seemingly insignificant injury to cause instability. This is because the knee is still developing and some children (especially girls) have naturally looser ligaments and some have an uneven or shallower groove in the femur. Young children with Down syndrome or cerebral palsy may have frequent patellar dislocations caused by muscle weakness and/or imbalance.

The sort of injury that most often causes dislocation or subluxation is where something has resulted in a sudden twisting movement of the knee. A sports injury can of course be caused by direct physical contact with the knee, but equally a sportsperson swinging a bat for example can dislocate their patella as their torso rotates while their foot stays in place on the ground. The most common non-sports related injury is a fall where the knee is twisted.

When patellar dislocation or subluxation occurs, in many cases it is immediately apparent that something is wrong with the knee, either pain and swelling and/or a change in its appearance. In other cases there may be few outwards signs, but instability can be diagnosed by a medical professional by bending and straightening the knee and feeling the area around the kneecap.

Where it is not immediately apparent that there has been either dislocation or subluxation, signs that this may have occurred include…

Surgery is only recommended where non-surgical approaches have been exhausted. Most cases of patellar instability can be treated with physical therapy and the standard 'RICE' (Rest, Ice, Compression, Elevation) protocol and by taking weight off - or immobilising - the affected knee with crutches or a cast.

Where there is any damage to the knee of any type, it is important to see a medical professional to assess the injury, even if the injury may seem inconsequential.

For more information on the condition and surgical approaches, check this page.