Role of the scapula in shoulder instability 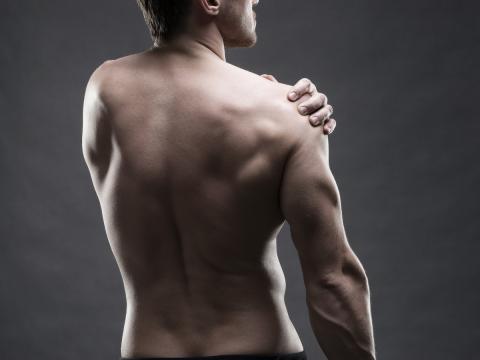 'Shoulder instability' is the medical term that describes the condition where the joint lining (capsule), ligaments or labrum around the shoulder are stretched or torn and thereby fail to maintain the humeral head (ball) within the socket.

This in turn is generally caused by either…

Dislocations and subluxations are generally the result of either some form of trauma to the shoulder, for example a fall or a blow to the shoulder, or from a repetitive strain injury, particularly where the arms are frequently working above shoulder height.

The shoulder joint - the most moveable joint in the body - is more prone to injury than other joints in the body as the ball at the end of the humerus is larger than the socket in the scapula, and so relies heavily on the muscles, tendons and ligaments around it to keep it in place.

Where there is damage to these muscles, the position of the scapula itself, or the way it moves when moving the arm or the shoulder, can change. This is referred to as 'scapular dyskinesis' – 'kinesis' means 'movement' and 'dys' means 'a change in' – so literally a 'change in movement'. This change in movement can also sometimes be caused by an injury to the nerves controlling the muscles as well as an injury to bones supporting the scapula or an injury inside the joint itself.

When looking at the upper torso from the rear, the shoulder blades appear as triangular bones with one corner at the shoulder joint. When the normal movement of the scapula changes in a way that makes the inner edge of the bone (ie the one directly opposite the joint) protrude slightly more this is an indication of dyskinesis. This is referred to as a 'winged' scapula and movement of the arm and shoulder where this is present can be non-synchronous and also sometimes may cause a snapping sound.

Scapulo-thoracic dyskinesia or scapular problems generally can be characterised by pain or tenderness around the shoulder blade, particularly along the top and towards the spine. In some cases there may be some weakness in the arm and rapid tiredness when repeatedly making the same movement with the arm. There may also be a change in posture, with the affected shoulder seeming to 'droop'.

Scapular problems sometimes go undiagnosed for long periods of time as the examination findings can be subtle and needs focussed scapular examination to elicit signs.

Ultimately, shoulder instability can be surgically corrected. However there are some things that can be done to help with the condition and help with scapula stability. These are…

Exercise
Scapular exercises are a very important component to managing shoulder instability, both as a non-operative option and after surgical correction. Upper body exercises, such as 'planks' or overhead presses involve the scapula, and there are correct ways to do these exercises to avoid placing unnecessary stress on the scapula. There are also a range of exercises that help to increase the strength and stability of the scapula which can go a long way to preventing shoulder instability. These exercises focus on specific muscle groups called scapular stabilisers and your physiotherapist would be able to help and guide you regarding these. In very general terms, any exercise regime should not involve only one set of upper body muscles, so bench presses need to be balanced out by different muscle movement exercises such as 'flys' and 'rows' to avoid problems with the scapula.