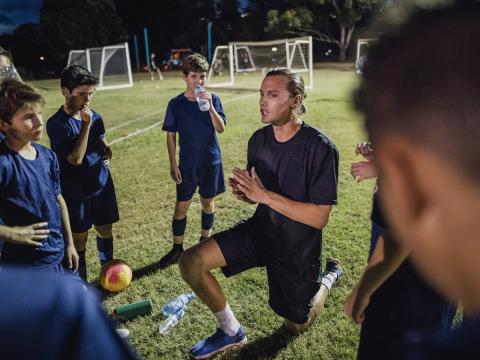 A study published in the Medical Journal of Australia in April this year* highlighted a steep rise in ACL (Anterior Cruciate Ligament) injuries and knee reconstruction surgery - a rise of more than 70% in this type of surgery for young men and women in Australia over a fifteen year period. What is concerning is the increase in incidence in children under 14, which is the highest growth group.

Generally, the groups most at risk from this type of injury are males aged 20-24 and females aged 15-19, and of these groups females are between two and ten times more likely to rupture their ACL than males.

Most injuries to the ACL are caused by the twisting of the knee, in turn caused by changes of direction while moving, running or jumping during sports such as netball, soccer, football and skiing. The increase in incidence in children is being put down - at least partially - to an increase in the seriousness with which children devote themselves to these sports, and the accompanying longer seasons and intense training sessions.

The net result of this focus on sport at a young age is around 30,000 ACL reconstructions per annum at an estimated cost of $142 million.

What can be done to prevent ACL injury?

One of the authors of the report, Associate Professor Christopher Vertullo, maintains that ACL injury can be prevented in at least 50% of cases and is advocating a national ACL injury prevention program.

In the interim, the following guidelines can help minimise this type of injury...

Where knee ligaments and other muscles are weakened there is more likelihood of ACL injury. Strength exercises that target these components of the knee, such as hamstring and quadricep exercises, as well as plyometric exercise, can help.

Having the correct fitting shoes can minimise the risk of twisting or landing badly and thus help prevent some ACL injuries.

There are a number of ways athletes and sportspeople can avoid situations likely to cause ACL injury - coaches can often provide good advice in this area.

This helps loosen the muscles, which may prevent ACL and other injuries. Muscles and ligaments that are either stiff or cold are more prone to injury.

A suggested exercise regimen incorporating most of the above would include an initial warm up, followed by stretching and strength exercises, then a plyometric session and finishing with agility exercised and a cool down period. To maintain some protection from ACL injury, these exercises would need to performed two to three times a week during the active playing season.