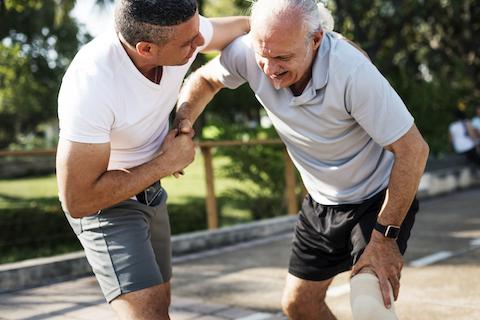 This is as a result of almost a 'perfect storm' of a range of factors. The main ones are, in no particular order...

The main issue, as covered to an extent in our previous article, is the increased burden placed on the knee joint by the extra body weight. The increase in force through the knee is roughly three times the extra body weight – so an extra 7 kilograms of body weight creates an extra 21 kilograms of stress on the knee joints. Knee joints very rarely 'break' under this extra stress, but they do wear out more quickly. As well as carrying this weight, a knee joint is particularly prone to damage from extra weight, since it needs not only to bend but also to twist, which requires a complex interaction between the joint and the various tendons, ligaments and muscles.

There is also another factor related to obesity, which is that it has now been discovered that fat tissue in fact releases chemicals that cause inflammation in the joints, which only makes the problem worse.

Almost all sports have an injury rate, and those which involve jumping and twisting actions, such as for example soccer, football and basketball, place a great deal of strain on knee joints. The temptation for a sportsperson is to return to the sport as soon possible, but unfortunately returning to sport too early creates problems in the long run, as the injury never fully heals. As it is people who have had a sports-related knee injury earlier in life are more than twice as likely than the general population to need to undergo a total knee replacement when they are older.

Getting a sports injury also creates a bit of 'Catch 22' situation for retired athletes – they have to give up their sport but then often put on weight due to a lack of exercise, which of course makes things worse again!

Government statistics show that in 2017 15% of all Australians were over 65 and, due to the baby boomer generation, this percentage is set to continue to grow over the next 20-30 years. This combined with increasing longevity (people are living on average 7 years longer than they did in the 1960s) means that, even without the other two factors, there would have been an increase in knee problems in the population anyway.

So – how can we prevent knee issues later in life? You can probably guess the answers, based on the above!

1.       Maintain a healthy body weight
2.       Get plenty of exercise - at all stages of life
3.       If you are involved in sport and suffer a knee injury, delay your return to sport until the knee has recovered properly, to prevent re-injury

An important part of maintaining a health body weight is maintaining a regular exercise regime. This can be hard, both for people who have a sports-related knee injury or for those who are already overweight.

Logic may indicate that putting any more strain on the knee joint might make it worse. This is generally not the case, either with being overweight or obese or having a prior injury. The best approach is to adopt an exercise regime and take advice from your doctor and/or physiotherapist as to what exercises to do and which to avoid.

In many cases simply building a walking regime into your weekly schedule is enough to lose some weight and exercise the knee joint. In fact most surgeons will recommend against a knee replacement where the patient is obese and will instead recommend losing weight first. Only where problems continue after weight loss will a knee replacement be recommended.