Joint hypermobility syndrome – what is it? 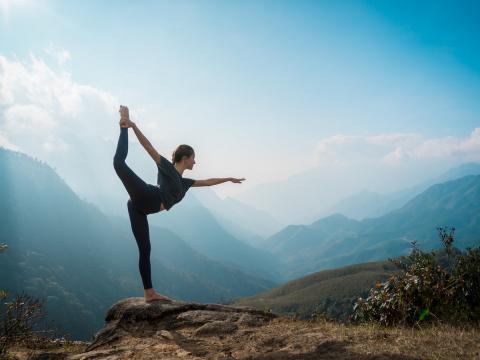 Joint flexibility varies greatly between people, and anyone who does yoga or martial arts will know there are some people who are just naturally more flexible than others. Flexibility is generally a good thing, however those people who have joint hypermobility syndrome – an extreme form of flexibility – are often more prone to a range of conditions affecting the joints and the muscles than people with a more normal range of motion in their joints.

The term 'double-jointed' describes the same thing as joint hypermobility. Estimates vary, but it is believed that anything from 5%-15% of people have some degree of joint hypermobility. It is more prevalent in children (since there is a natural loss of flexibility as we age) and in most cases a person will have one or maybe a few joints which are hypermobile, not necessarily all joints.

Although the precise reason why some people have hypermobility is not fully understood, the condition is believed to be inherited. In fact there are some relatively rare inherited conditions where hypermobility is common, such as Ehlers-Danlos Syndrome (EDS), as well as Down Syndrome and Marfan Syndrome. All of these conditions impact connective tissue in the body, making it weaker than normal.

Current thinking is that the genes that are responsible for these conditions are somehow involved in the production of collagen, a protein which helps to keep connective tissue - like the tissue in muscles and ligaments - 'glued together'.

Joint hypermobility is not really a condition that needs treating as such, but having hypermobile joints can make you more prone to certain types of injury - such as joint sprains and joint dislocation - and more prone to a range of musculoskeletal conditions, including…

Also people with the condition tend to experience more joint pain, especially in the fingers, elbows, hips and knees and as they get older, may develop degeneration to cartilage tissue and arthritis more commonly than the rest of the population.

Although hypermobility can be relatively straightforward to diagnose visually (simply by observing the range of motion of the joints), in other cases signs of the condition may include general aches and pains, tiredness, headache and in some cases gastrointestinal issues. Children with the condition also often experience pain after long periods of writing with a pen or pencil.

There is no specific treatment as such for hypermobility, however there are some exercises that can be done to strengthen the muscles around the joints, such as swimming, light weight training and stretching, which can help minimise the possibility of sprains, dislocations and other injuries.