Getting pins and needles in your hand? It might be carpal tunnel syndrome 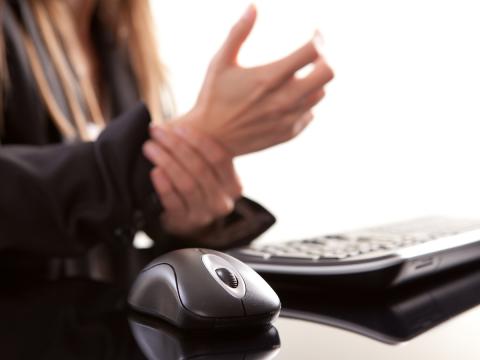 If you've ever bashed your elbow – your 'funny bone' – you'll be familiar with the zinging sensation you feel afterwards. In fact what's actually happened is that you've hit your ulnar nerve which connects your little finger and your third finger to your brain and controls hand movement related to that part of the hand. This nerve – which is close to the surface of the skin at the elbow - has been compressed against the humerus bone (the main bone of the upper arm), which causes that zinging feeling.

At the elbow the ulnar nerve goes through a passage called the 'cubital tunnel', and any pressure or stretching of the nerve at this point – 'compression' – can cause symptoms from the 'funny bone' zinging sensation to numbness and tingling in the little and third fingers, weakness in the hand and/or pain in the lower part of the arm. This is called 'cubital tunnel syndrome'.

Carpal tunnel syndrome is caused by the same type of compression of a nerve, but in this case it is the median nerve which (along with the flexor tendons) travels through a similar tunnel through the wrist called the 'carpal tunnel', and controls the thumb and the index and middle fingers, plus a section of the third finger. Since it shares this tunnel with tendons that work the hand, any inflammation of these tendons will put pressure on the median nerve, causing symptoms.

Common symptoms of carpal tunnel syndrome are intermittent tingling ('pins and needles') or general aching in the hand, and in more severe cases the hand may become completely numb and incapable of holding or grasping things. Some people with the condition report being woken up while asleep with numbness of the hand (where it 'goes to sleep') and then having to move the fingers to regain feeling.

A range of things can cause the syndrome, the most common of which is repetitive use of the hand or wrist, such as working at a computer or keyboard or extended playing of musical instruments such as the guitar or piano. Other causes include injury to the wrist, wrist arthritis, pregnancy (where there is often fluid buildup in the wrist), the presence of a cyst or tumour in the carpal tunnel itself, or simply the physiology of the carpal tunnel – some people naturally have a narrower space in the tunnel.

Although carpal tunnel syndrome can affect anyone, it is more prevalent in women (who are three times more likely than men to have the condition) and in people aged 40-60. It is also more common in people who are diabetic or who have thyroid disease, and in smokers and people who are obese.

For some people with the condition, non-surgical treatment may be enough, such as wearing 'night splints' to keep the wrist extended when asleep, or a steroid injection to reduce any inflammation in the tendons travelling through the carpal tunnel. Where these treatments do not help, surgery is an option. The procedure is straightforward and is generally performed as a day surgery, either under local or general anaesthetic. A small incision at the base of the palm allows access to the ligament which goes across the top of the carpal tunnel, which is divided. Most people undergoing the procedure report a rapid improvement in symptoms, although people who have had the condition for a long time may take a little longer to regain full sensation.

Surgery for Nerve Compression Syndromes
Is wearing an elastic band around your wrist dangerous?