Is exercise bad for your joints? 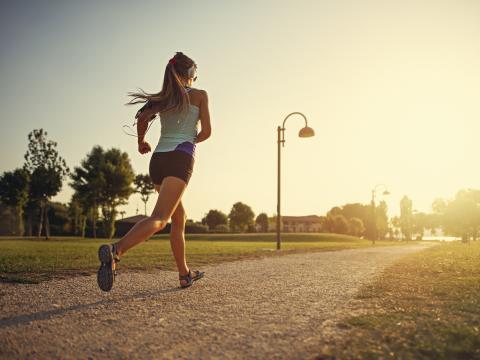 It seems logical that the more you use something, the more likely it is to get 'worn out' quickly. Following this logic, exercise cannot be good for your joints. As it turns out this is not quite right, although the answer is a little bit more nuanced than simply saying 'exercise does not cause joint problems'.

The assumption about a joint wearing out is not correct for one main reason – joints in the human body are not just mechanical joints, they are biomechanical joints. This means that they are in effect 'self servicing' – the body ensures that affected parts – like cartilage – are to an extent adapted 'on the fly' to cope with the pressures a joint is put under.

The main culprit in joint pain and difficulty of movement is arthritis, and, of the one hundred plus conditions affecting the joints between bones lumped under the term 'arthritis', the most common type is osteoarthritis.

Osteoarthritis is sometimes referred to as being down to 'wear and tear' and to the extent that it is more common in older people this is true, but in reality anyone can develop osteoarthritis caused by anything from an injury to a joint (eg. in an accident or due to overuse), to genetic factors (some people inherit a slightly softer form of cartilage for example), or to being overweight, which places extra stress on the joints.

A number of studies over the years have looked at any correlation between exercise and the development of osteoarthritis and have generally come back showing not only no correlation, but in one study an inverse correlation – that is the more the subjects did exercise the less joint pain and osteoarthritis they had.

One long term study(1) of runners aged over 50 conducted from 1984-2004 found that these runners had less pain than a control group of non-runners - female runners reported an increase in 'aches and pains' of 11.8% (between the ages of 60 and 80) as against a control group of non-running women who reported a 70.6% increase over the same timeframe. The results for men were similar with figures of 17.6% and 41.4% respectively.

Another more recent review(2) of 25 different studies concluded that there was no link between osteoarthritis in the hips or knees and being a runner, in fact it found that 'recreational runners' had a relatively low prevalence of osteoarthritis of 3.5% compared to the 'non runners' where prevalence was 10.2%. However the 'rider' of this study was that 'competitive runners', that is professional athletes or ones who had run for their country in international events, had the highest prevalence at 13.3%.

Of course there are also some types of exercise that are more likely to cause joint problems later, and these are the ones that place regular stress on specific joints, such as soccer, rugby (and all types of football), skiing and basketball/netball. Most of these sports involve some twisting of the leg and ACL (Anterior Cruciate Ligament) injuries sometimes result. Any damage to the ACL increases the risk (by 70%) of developing osteoarthritis within the following 10-15 years.

So, in conclusion, in general exercise helps your joints by helping you stay at a healthy weight and helping you to keep the muscles, ligaments and cartilage in and around your joints in good working order!

(2) The Association of Recreational and Competitive Running With Hip and Knee Osteoarthritis: A Systematic Review and Meta-Analysis The Journal of Orthopedic and Sports Physical Therapy June 2017